Compartmentalizing the shell of block copolymer micelles can produce complex nanoparticles with phase-segregated coronas exhibiting interesting interfacial properties. One of the well-known approaches to such multicompartment micelles is to use an ABC triblock copolymer, and deliberately assemble it into patchy micelles. The Axel Müller group (currently at Johannes Gutenberg Universität Mainz) has demonstrated wonderful examples of multicompartment micelles and shown that the “inverse hamburger”-type patchy micelles can further associate with each other to produce 1D supermicellar chains (see https://www.nature.com/articles/ncomms1707 for example).

Here we show that 1D supermicellar chains can be spontaneously produced during polymerization, and their length increases with the increasing conversion. Our micellar building block is a core cross-linked star (CCS) polymer that contains multiple polymer chains radiating from a densely cross-linked core. We polymerize a mixture of a monomer and a cross-linker following the reversible addition-fragmentation chain-transfer (RAFT) process in the presence of a polymer chain A that carries a chain transfer agent at the chain end. By adopting the polymerization-induced self-assembly (PISA) approach, we choose the solvent to be incompatible with the growing cross-linked core and effectively produce the CCS polymer, which is equivalent to a cross-linked micelle with A corona. A chain extension with another monomer can be realized as the chain transfer agent remains on the core surface. If the growing polymer chain B is solvophobic and also incompatible with the pre-existing A corona, compartmentalization occurs in the “miktoarm” CCS polymer being formed to produce patchy micelles. At an optimal core volume fraction, we show that horizontal association to 1D supermicellar chains is preferred to minimize the exposure of the solvophobic B patch.

This work was done in collaboration with the Won Bo Lee group at Seoul National University & YongJoo Kim at Kookmin University for dissipative particle dynamics simulations, and the Eunji Lee group at Gwangju Institute of Science and Technology for TEM analysis. The manuscript is available at the following link: https://pubs.acs.org/doi/10.1021/acsmacrolett.1c00625. 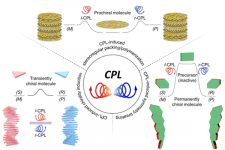 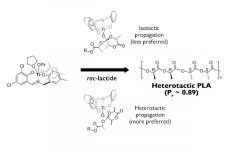